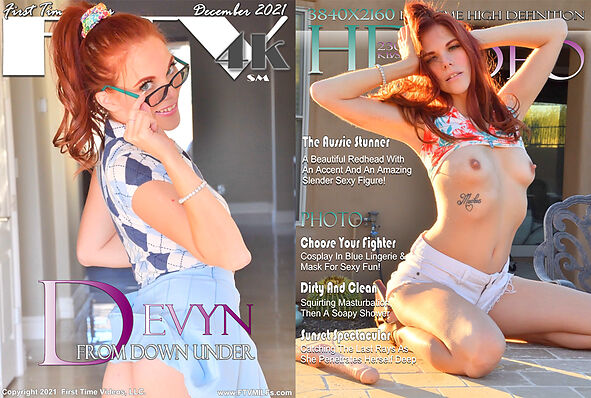 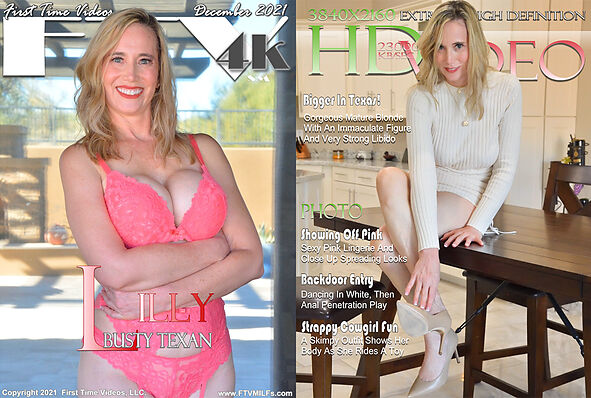 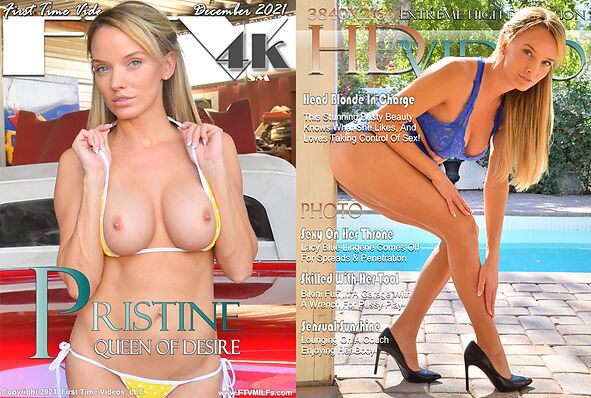 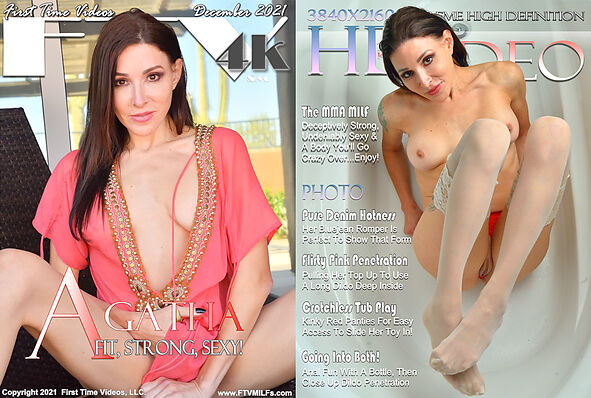 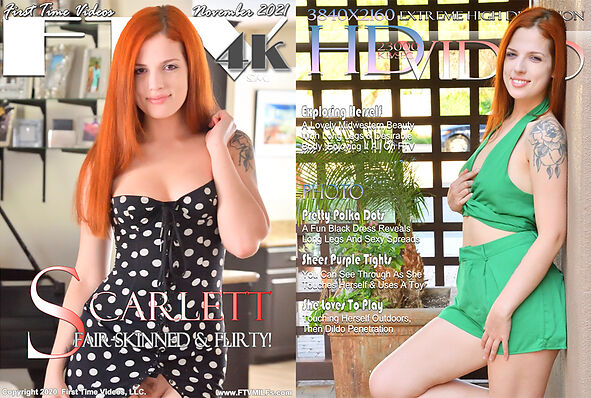 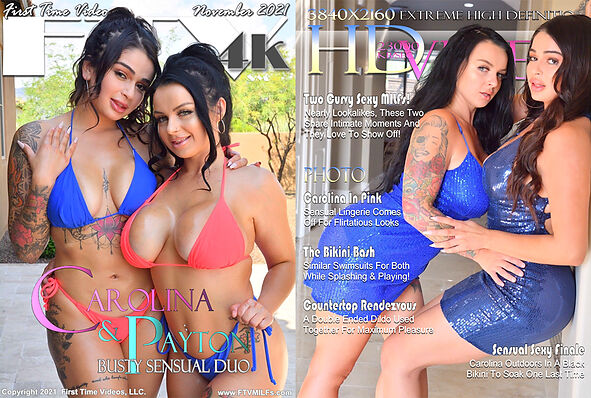 The beautiful busty pair of Carolina and Payton make one heck of a team as they're welcomed back to FTV MILFs in their matching bikinis, rubbing oil all over each other and enjoying their curves! Seeing those big round juicy butts covered in oil is a real treat and the ladies love playing with each other. They're both curvy, tattooed, beautiful, dark haired hotties and were excited to do a girl-girl shoot together here on FTV...and they certainly get right into the fun, kissing and caressing each other and then Payton takes a water hose stuffed inside her hole to squirt out! Unfortunately Payton was having some health issues so she had to sit out for some of the shoot, but Carolina certainly stepped up and made sure it was still a fun and very sexual day. We see her in a fluffy pink robe and white lingerie, teasing with her sensual form and licking her fingers before pleasuring herself with them...and then using a magic wand toy to masturbate to orgasm! Payton rejoins the fun for a bit and we see the two getting naked together, walking hand in hand down the hallway - giving us a great look at those butts in motion! - to head to the kitchen and play with a couple of bananas. The kitchen counter becomes the bed as one beauty lays back and stretches out while the other licks her way down, enjoying every inch of that incredible form. A big double ended dildo comes into play so both of them can enjoy the deep penetration at the same time, and Carolina takes the opportunity to give some more oral as well, bringing Payton to climax! To finish off the day we enjoy Carolina in a sexy skimpy thong bikini, splashing around in the pool outside to give us a relaxing look at that body one more time. It was unfortunate that Payton was unable to participate for the full shoot, but seeing these two was a real treat and we certainly get quite the show this week on FTV! ;) 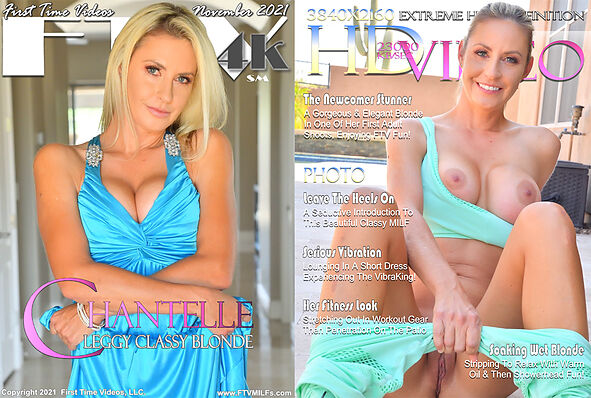 Chantelle is a leggy, tanned, beautiful blonde and we're introduced to her at the front door which she opens in a lovely blue dress...she's a first timer but clearly the camera loves her and clearly she's ready for some fun! She drops her dress to reveal her enhanced breasts which she loves, rubbing her hands over them and giving her pair a nice massage. Kicking one leg up - still wearing her classy high heel shoes - she rubs her privates through her panties, enjoying the sensation so much she has her first climax of the day. Next she reaches for a large purple vibrating toy, which she licks and sucks to show her oral technique before slowly sliding it inside and enjoying the penetration. Next she's handed the powerful vintage Vibraking toy to try out, and it immediately impresses her with the ultra-strong vibrations as it brings her to orgasm! Heading outdoors in tight stretchy workout gear next, she puts on some music and exercises to the rhythm as we admire her athletic fit form...and then lying down on the ground and taking off her clothing she takes a glass toy to insert, fucking herself harder and faster to another nice orgasm. Afterwards she heads back indoors, hopping into the bathtub in her black bra and panties and talking about some sexual history before undressing...and then she slides her hands over her breasts, massaging them again (she loves playing with her boobs)! Next it's showertime as she sprays water all over that fit shapely form, enjoying the wet pleasure as she uses the showerhead between her legs spraying directly onto her clit...and it brings her to yet another orgasm. We get to see an alternate angle of the tub and shower shoot to finish things off after that...Chantelle is a gorgeous and very sexual blonde newcomer to the adult scene and is just the right kind of woman to knock us dead here on FTV MILFs! 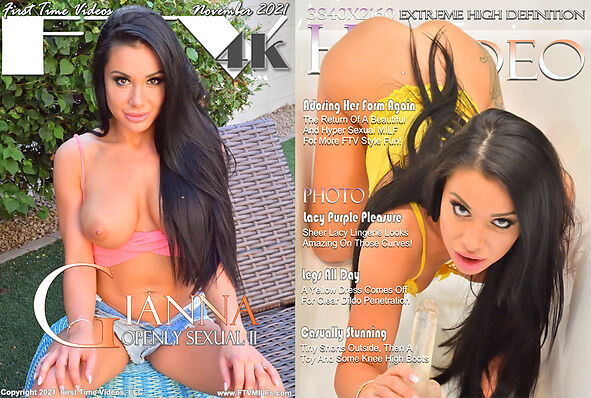 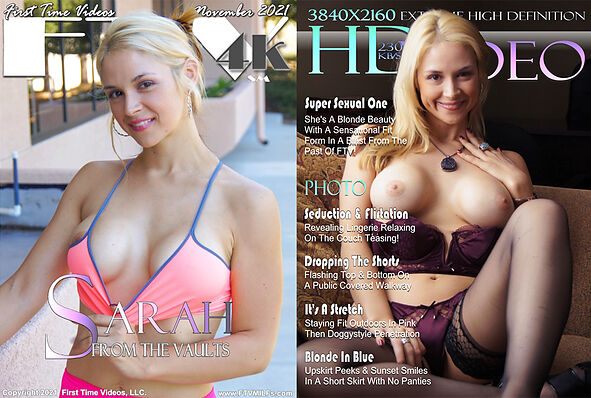 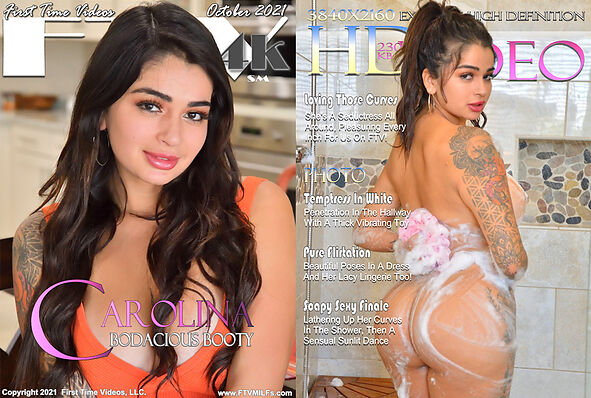 We're introduced to gorgeous dark haired hourglass Carolina as she walks towards us in a white dress and high heels, chatting about a little of her sexual history and we note her sultry husky voice...and as she unties the top of her dress she reveals that big juicy pair for us, including her sexy tanlines! Relaxing on the hallway chair we watch as she gives herself a hard breast massage, spreading her legs - we note she has no panties on beneath - and then she starts to rub herself with her fingertips before reaching for a vibrating white toy. We watch as she licks and sucks the toy, then starts penetrating herself with it faster and faster until she enjoys her first orgasm of the day. After changing into an orange dress we see her bent over a bit, treating us to a view of that gorgeous round butt peeking out from under the dress. She sits on the kitchen table, spreading wide and using the powerful vintage Vibraking toy for huge vibration pleasure to enjoy multiple strong orgasms! Next she heads to the shower, doing a little sensual dance as she strips out of her lacy red lingerie and teasing with that incredible figure before turning on the water and getting all soapy and dripping wet with a long luxurious shower. The day finishes with a sexy dance silhouetted in the late afternoon sun coming through the front door, and again we marvel at that amazing curvy figure in motion...Carolina is a gorgeous, voluptuous, and very sultry woman ready to bring your fantasies to life here on FTV! 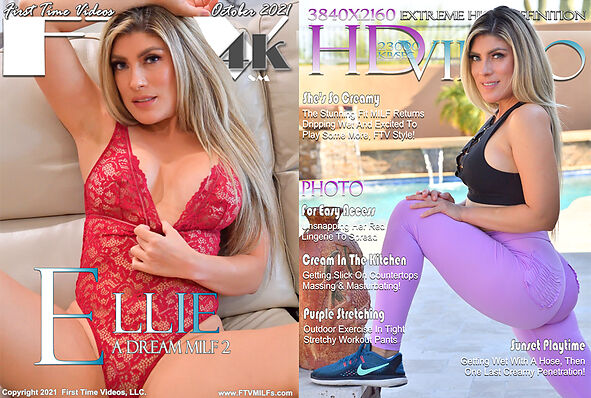 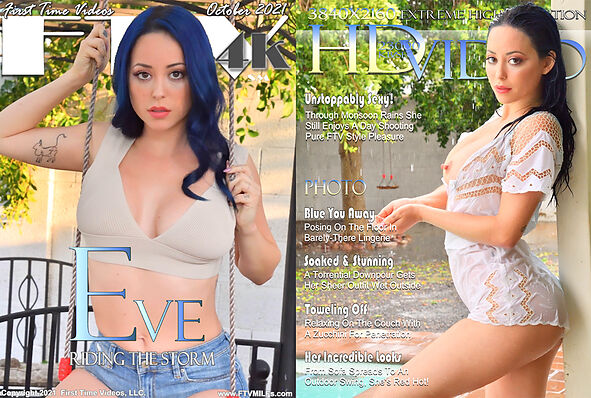 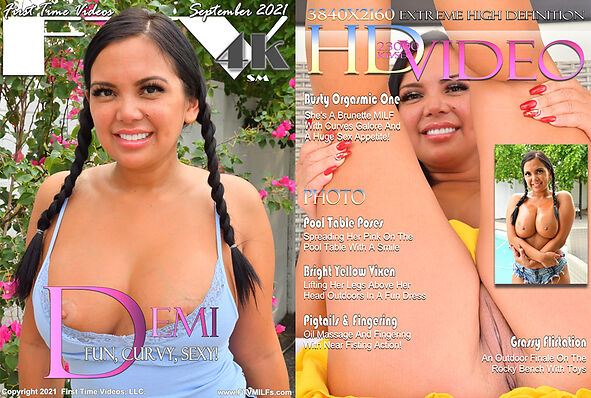 Our very first look at lovely dark haired babe Demi is a closeup of her amazing chest, and it certainly starts things off on the right foot here on FTV! She looks amazing in a soft blue top - barely holding those big breasts in check - with her long hair in pigtails as she introduces herself and then gets topless to enjoy a hard breast massage with oil. A butt massage comes next and we note how amazing her curves are...especially gleaming with oil as she rubs herself! Lying on her side, we see her inserting one...and two...and then four fingers at once as she nearly fists herself. After changing into a yellow dress we watch as she plays with her pink nipples, spreading her thighs to give access to her privates with a big magic wand type toy...which she holds against her clitoris as she fingers herself, enjoying a strong orgasm with squirting! Next she heads indoors to put on her lacy red lingerie, doing some sexy dancing to her music and wow, she can really move those curves...her butt looks incredible as she bends over, spreading her legs open using the pool table! Climbing up onto the table in the nude after the song ends, she uses her fingertips to pleasure herself and then reaching for a vibrating white toy which she slides against herself before enjoying the deep penetration to another orgasm, with her juices flowing freely. A list of questions from the photographer comes next, with Demi relaxing in the nude on a chair answering each one. Heading outdoors in a very skimpy little bikini that keeps falling off of her breasts, Demi poses on the grass and then sits on a large rock in order to comfortably fuck herself with a large glass toy, sliding it in and out of her hole until she has one last orgasm for us...she's a fun, curvy, and very sexy MILF to enjoy here on FTV! 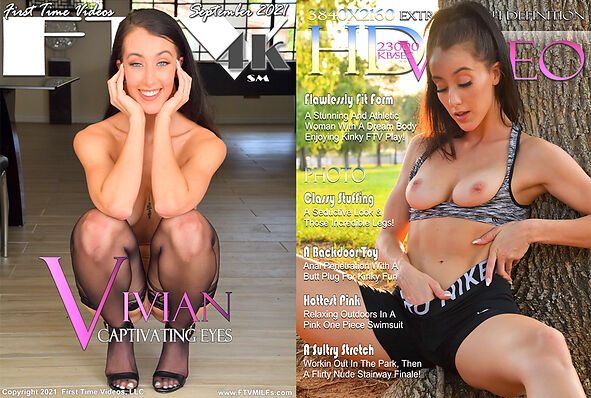 Things start off leggy as we get a look at beautiful Vivian in her lingerie, moving slowly to the music and we note those piercing seductive eyes...not to mention her amazing fit athletic body with a tight cute butt and sexy legs! After her dance we watch as she slowly removes her high heel shoes and sheer thigh high nylon stockings, using her fingertips to stuff them inside her hole for kinky fun until they all but disappear. Reaching for the powerful Vibraking toy, we see her holding it against her clit for strong vibrations with her stocking still stuffed inside...and enjoying squirting orgasms before tugging the stocking out! Heading outdoors in a pink swimsuit afterwards, she takes her breasts out as she discusses her nipple piercing as well as some of her early sexual experiences - with both boys and girls. Next she grabs a yellow vibrating toy and gets completely naked while sitting on top of the outdoor couch, spreading her legs and rubbing the toy against herself before sliding it gently in and out of her vagina. Inside on the living room couch in lacy pink thong panties, she talks about some of the fun toys she brought along for the shoot...including a cute pink buttplug which she slides inside for anal pleasure! With the toy in her ass and another penetrating herself, along with the Vibraking for clitoral stimulation, it doesn't take long before she's enjoying another nice orgasm! Out in a park we see her stretching her legs out against a tree while wearing stretchy exercise gear, enjoying the fresh air and letting her pert boobs out to play as well. After a quick jog she heads back to the house, slipping out of her clothing and masturbating with her fingertips on the stairway for a little last look at that amazing body before she heads to the airport. Vivian is the total package; a stunning and charismatic woman with an incredible body and a kinky streak, plus a love of showing off which works out great for us here on FTV! 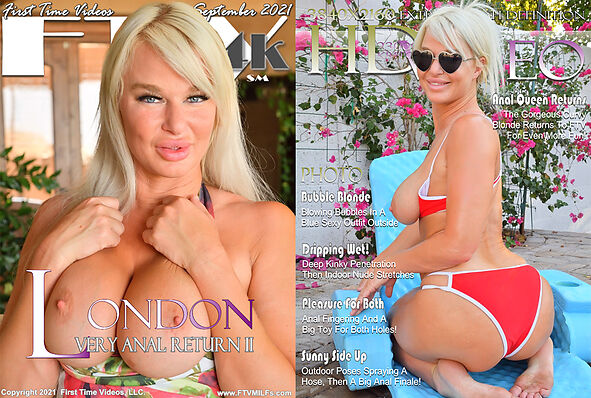 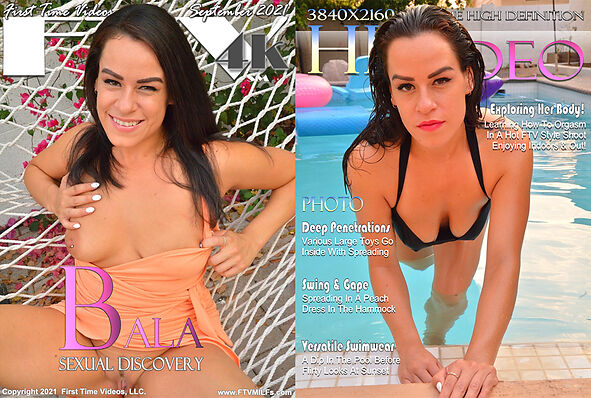 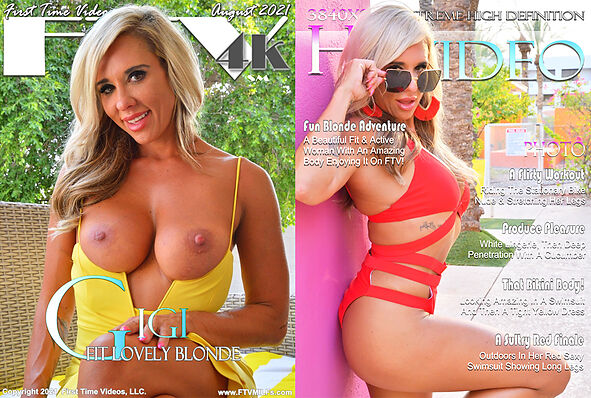 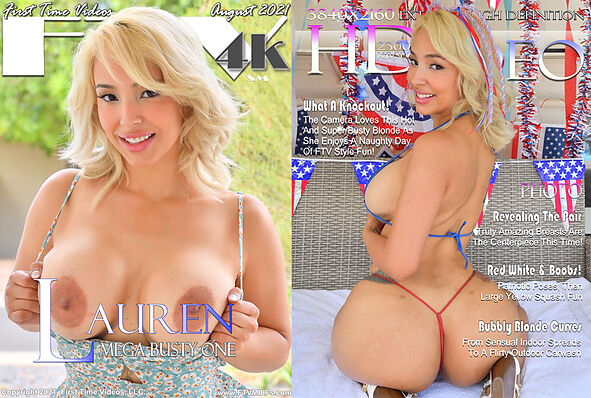 Lauren is ready to rock your world with those incredible MILF curves of hers here today on FTV, and she introduces herself popping through the doorway in a cute dress with high heels and sitting on the windowsill. Spreading her legs, we see she has no panties on underneath her dress as she shows one of her favorite toys and lets those large enhanced breasts out of her dress to rub and squeeze together, then holds the toy against her clitoris for a nice masturbation session. Next we see her in a baby blue top and panties, dancing seductively to some music and stripping down until she's completely naked...and we note how sexy her movements are, she knows just how to dance to heat things up! Afterwards she grabs a glass toy and relaxes on the couch - with another song playing, just to set the mood! - and starts penetrating herself, enjoying the deep sensual experience and using a magic wand vibrator as well to bring herself to another nice orgasm. Heading outdoors to a patriotically decorated chair we see her licking a blue and red popsicle as she talks about some of sexual history...while her breasts very nearly fall out of her tiny bikini top! She rubs a popsicle against her lips and then against her nipples, enjoying the sticky cold juice melting over them on a warm sunny afternoon. She wants some kinky veggie penetration so we see her grabbing a large yellow squash, sliding it inside her hole faster and faster and using a vibrating toy as well. Next it's time to head out and about and we see her at a local carwash, scrubbing down the car with her boob peeking out...and she certainly attracts some eyes! It's a little too busy though, so we see her in the convertible for a little bit more privacy as she slips off her bottoms and starts to finger herself one last time before saying goodbye...a super cute and super busty beauty who loves to play here on FTV! 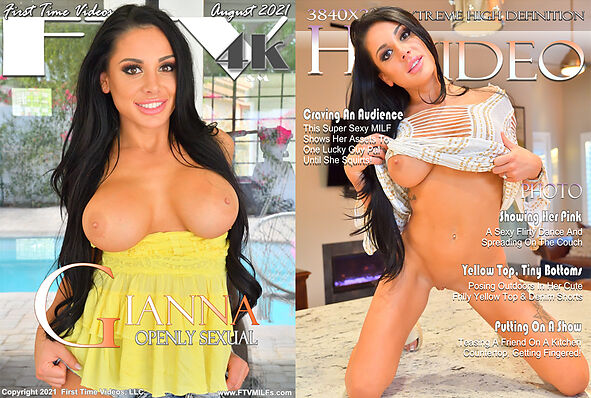